The History Of Japanese Footwear 『Geta』

Speaking of footwear worn according to kimono, many people may think of clogs. Geta has changed its purpose of use along with the change of history. This article is about summarizing and explaining the history of Geta briefly!

The ancient people are barefooted in the past, and it has been discovered since about the 2nd century when Tageta had existed. Also, during this period, clogs were found, and it is presumed that high-ranking people were wearing it.

In the Nara period, high-ranking people such as Royal court people wore shoes and were made by sewing animal fur and cloth. During the Heian period, Japan’s unique culture began to develop, and footwear also achieved its own evolution.

In this era, not only courts and public houses but also the general public weared footwear. It is said that footwear did not change significantly until the Edo period.

Since the beginning of the Edo period, the development of geta has been remarkable, and various changes have been seen. Footwear shop are listed in “Edo shop guidance” at this time, but specialty store of geta house did not exist yet. It is said that clogs were used to keep the feet clean at the time of excretion.

Paints that are painted in black and blue and warp in the form of bats from Genroku to Houei will be popularized mainly in Osaka and Edo. Genroku means one of the year names of Japan and Houei is the same. Geta is often worn as a fashionable item at this time. In addition, the reform of Tempo controls the consumption of clogs, and clogs in the Edo period were treated as luxury goods. 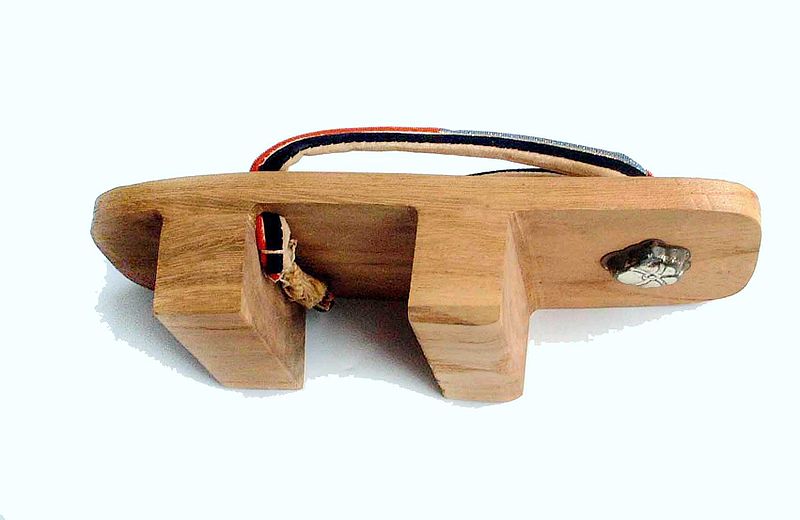 The most orthodox and easy-to-walk Dojima geta (two-toothed) is popular among men, and a female called Komachi geta, whose teeth are beveled and its back is rounded, is popular among women.

In addition, children used clogs called (pokkori) that make a “pop” sound when they walk with hollow teeth. Pokkuri is still used at the time of Shichigosan or when Maiko wears it.

Geta that has been worn less frequently as all footwear is in vogue. It may now be worn often during special events and celebrations. Geta has long been loved by people in various ways, and even now it remains the same.